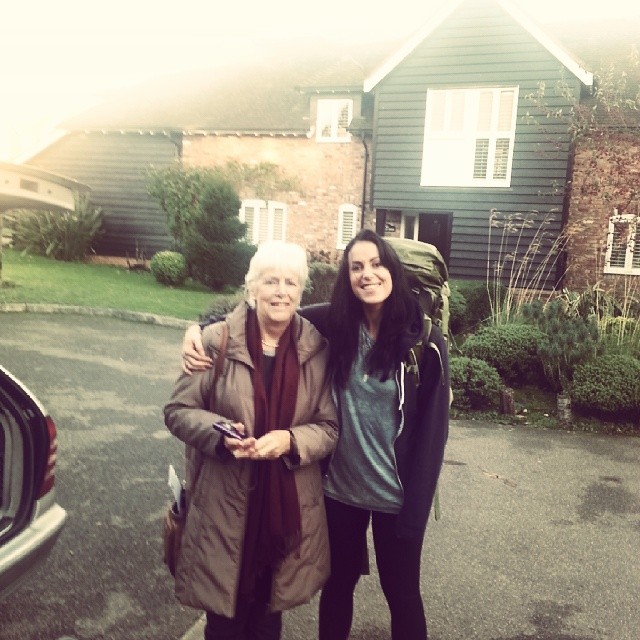 “It was a shock to the system to be back in a work environment: to have to fight the urge to delightedly point out a rainbow during an important meeting because it would make me look like an actual lunatic to my new employers.”

*This article also appeared on The Huffington Post. Check out the article here.

I’m hot, sweaty and wishing more than anything that the guy behind me would stop breathing alcohol fumes in my direction. Sadly there is no room to escape. I am crammed into a tube carriage with my 60-litre, mud-covered backpack, dodging evil looks from commuters because I made the fatal faux pas of passing through central London at 8:30am on a Friday morning. I know I don’t have a leg to stand on so I keep my eyes pointed down, I bite my tongue and I apologise profusely every time the doors open and more commuters sardine themselves in around me.

This return to London took place two months ago but I remember the waves of emotion I was riding the whole way down the Piccadilly Line like it was yesterday. After six months gallivanting around South America, I had nervously checked my bank balance and conceded that the time had come to return home, to London. It was time to face reality. I needed a job, fast. I also needed to relearn how to brush my hair, wear shoes and function like an adult rather than a grubby backpacker.

My first couple of weeks were emotional to say the least. It was a whirlwind of catching up on news, having the same conversation over and over again and spending way too much on nearly maxed out credit cards on alarmingly expensive drinks in one faceless trendy bar after another. I was used to beach bars where your only option was one brand of lukewarm beer, now I could quite literally have anything my heart desired, plus hundreds of things I didn’t even know existed. It made my head spin.

After months living in the Sierra Nevada Mountains in Colombia, where on a daily basis I would perhaps encounter 20 people at the most, London was a real shock to the system. Whenever I ventured out of my flat I felt apprehensive. People seemed intent on pushing past me, cutting me up or treading on my feet. No one was smiling. Plus, I might have been paranoid, but it felt like the obscene amount of pigeons could sense my fear and were choosing to fly directly at my face at every given opportunity.

In my months absent from the real world I had forgotten almost all London etiquette. I had become that person standing gormlessly in front of the Underground map infuriating people on a Monday morning when all they wanted to do was top up their Oyster and proceed with their journey without some scruffy haired idiot standing in their path. I was the girl stopping in the middle of Oxford Street squinting at the map on my Samsung in order to navigate my way to that side street in the darkest corner of Soho for a job interview. I was the irritant asking one too many questions in the station because I had forgotten that Citymapper existed and human interaction for these kinds of matters was wholly unnecessary. I lost count of the amount of times I was tutted at or had eyes rolled at me in that first month.

It was also a shock to the system to be back in a work environment. To have to remember that it is necessary to focus for eight hours a day to earn a living. To have to fight the urge to delightedly point out a rainbow during an important meeting because it would make me look like an actual lunatic to my new employers. To not obviously roll my eyes at phrases like “thought processes” or “timeframes” because now both of these things were important. To actually have to wash every morning and dress in something other than baggy trousers and a tatty vest top. There was so much to think about!

I was also monumentally overwhelmed by everything happening around me. The fast pace. The silent buses that I didn’t think to look for when crossing the roads. The numerous people trying to flog me something or offering comment on how my bum looked in my new work skirt. There was never any silence or moments of calm. I couldn’t hear the birds chirping or the wind rustling the trees. For the entire duration of my first month back in London I was too slow, jumpy, inappropriately attired and consistently in the path of oncoming traffic.

Things changed of course. The fact that I had no money meant a lot of walking and bike riding. This and the uncharacteristically beautiful weather inevitably led to me rediscovering London.

On my ride home I’d find myself skidding to a halt on London Bridge to gawk at the majesty of Tower Bridge and HMS Belfast or taking a detour past the Houses of Parliament, Westminster Abbey and the London Eye, grinning like a loon the whole time. I continued to bother Londoners by stopping to take a million photos of The Shard, which I had barely cared to glance at prior to my trip. I was looking at London with fresh eyes and I liked what I was seeing.

Before I departed you would have found me rushing from A to B, talking rapidly into my phone, ducking down tried and tested side streets to reach my destination faster. Now, I was taking advantage of the slower pace I had become accustomed to in order to stop and notice the things around me. The blue plaques announcing that one of my favourite writers used to walk the exact same patch of pavement I was now standing on. The distant sounds of music coming from a new venue that I hadn’t yet seen a gig at, the irresistible smells coming from that pop up restaurant that my friends had been talking about. There was so much that I had ignored before because I was just too busy being a Londoner.

London is crazy. It is big, loud, brash and scary. It is fast. It’s unapologetic and ever-changing. But despite all of these things, it is home and I love it. It just took six months away for me to realise all of the many, many reasons why.

related posts
Where are the best family areas of Auckland?
Hot Dam! 10 Best Party Hostels in Amsterdam for every wild traveller
The best hostels in Milan for every type of backpacker
No Comments