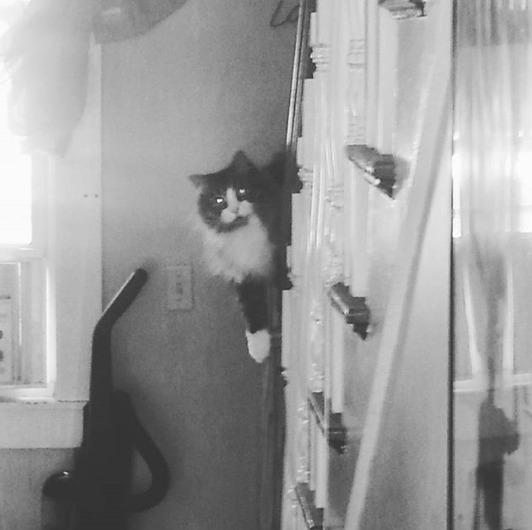 “Spring, with its bunnies, daffodils, and beer gardens is waving at us coquettishly from the horizon…and you know what it’s saying? “Let’s all get pissed and look at cats!”

*This article also appeared on The Huffington Post. Read the article here.

For those of you currently schlepping through your Monday, having to drag every weary finger across the keyboard and put your whole body weight into bashing that space bar… know this… elsewhere in the world people are starting the week strong. Making a statement that this could be the best week of the whole bloody year if we choose to seize that baton and continue running in the direction we’ve been pointed in.

Today, in Japan, it is National Cat Day. Have you ever heard of a better idea? Doubtful.

Whilst we’re forcing down eight pints of water and vowing to get more sleep next weekend, Japan is getting nuts, honouring our feline homies. There will be no ‘Monday Blues’ in Japan, because they’ll be feasting upon sugary-foods shaped like cats. They’ll dress as their own cat, a cat they know and like, or as their favourite cat from history, and most importantly, they will prank their cats. That’s right, you ‘eard.

Although I’d love nothing more that to discuss my love for cats, the pranks I’d stage, and how I’d likely celebrate (by putting my face as close to as many as possible in a 24 hour period), there are other things going on today that require our attention…

Not only is Japan currently caught up in a glorious haze of cat-based frivolity, but elsewhere in the nation (most probably across the cities rooftops) National Ninja Day is also underway. As we speak the annual ninja parade (I’ve created in my head with zero research) could be underway, continuing its reign as the quietest, and fastest parade on record, yet again failing to attract the crowds the ninja community were hoping for.

It may seem that Japan is the only place to be on February 22nd, but I have one last revelation bomb to toss into today’s joy pot – National Margarita Day.

Now, if we were to combine these three inspired national days – think how much good it could do for the collective psyche of the planet. It’s potential for excellence is almost too much to fathom.

We’d be the recipients of unexpected deliveries of cats through open windows, by ninjas who’ve previously felt undervalued…

Ninja employment levels would zoom up, and no household would go un-kittened…there’d be cats delivered into bike baskets, cats floating down from the skies wrapped in tiny cat-sized (ninja patented) hot air balloons into the hands of tequila-drunk happy people who didn’t think they’d ever know joy again.

It would be a glorious message from all the world’s leaders that yes, world, you have almost made it through the two bleakest months of the year. Spring, with its bunnies, daffodils, and beer gardens is waving at us coquettishly from the horizon…and you know what it’s saying? “Let’s all get pissed and look at cats!”

Now there’s a holiday with the potential to knock Christmas off the top spot – we’re all bored of that anyway, right?