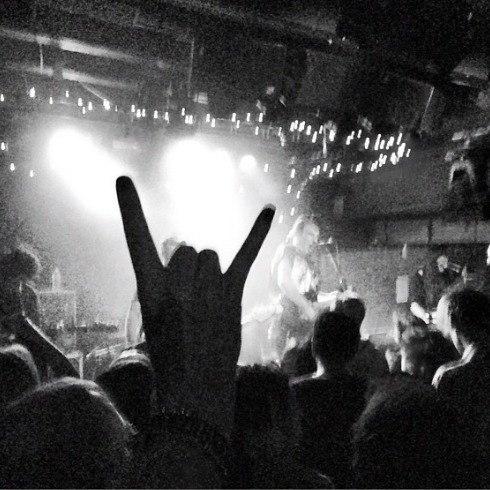 “The girls behind me were talking at a speed and in a pitch that was mind-boggling. There were hairstyles so intensely bleached and requiring so much gel work that if you had told me they were visiting from the future, I wouldn’t have batted an eyelid.”

*This article also appeared on The Huffington Post. Check out the article here.

Last week I was excited to be attending my first gig in eight months at Borderline in Soho. After this hiatus I was looking forward to cramming myself into a tiny, sweaty venue, to drink some cider and to move my shoulders, or just tap my foot, in time with the music of UK/US band Drowners. In fact, I couldn’t think of a more pleasant way to spend my Wednesday evening.

Upon arrival it was clear that something wasn’t quite right. This didn’t feel familiar. Whilst navigating my way through the tightly packed crowd to reach the strangely deserted bar, I barely had to try. There were no un-smiling, gig-weary people standing in my way refusing to make eye contact, to remove their hands from their pockets or to move. All it took was a couple of “excuse me’s” and one spritely teenager after another would grin and leap out of my path.

My friends and I took up our spot leaning on a wall at the back and I had time to survey the crowd. Something was up. The girls behind me were talking at a speed and in a pitch that was mind-boggling. There were hairstyles so intensely bleached and requiring so much gel work that if you had told me they were visiting from the future, I wouldn’t have batted an eyelid. Also, I appeared to be a comfortable head taller than everyone in my immediate vicinity.

Frenzied screaming, of the type I had once reserved for Take That and Party on VHS, greeted the band as they slouched onto the stage. All of a sudden it dawned on me. It felt weird because everyone here was half my age.

As the band thundered through their opening tracks, I stared open-mouthed. I hadn’t been this close to a mosh pit since the day I had mistakenly found myself front and centre for Limp Biscuit at my first ever music festival. There were loom-banded gangly arms lashing out at anyone and everyone and furious bouts of snogging between couples with identical scruffy haircuts. In addition, every single one of those moshing mentalists was screaming the lyrics into the faces of their neighbour as if they had dared question their love and knowledge of the band.

It was a sight to behold. A glimpse into the past. I barely watched the band; it was just too interesting watching those around me. I noticed many a pretty girl strategically mosh into a beam of a spotlight, pouting and hoping like I once had that tonight would be the night that the lead singers eyes would find theirs and they would live happily ever after, free from the restraints of A Level revision and parents. It made me nostalgic, until the spitting started…

The band were spitting onto the floor, onto the roof and at one stage even into the crowd. I couldn’t quite believe my eyes. However as I whirled around trying to establish whether everyone else was equally appalled, I saw that if anything, all it had done was drive the crowd more wild! Even in the days when I would try and push to the front of every Shed Seven gig I could get tickets for, if I had been spat on by one of the band, I wouldn’t have been cheering. I would have been running to the toilets to scrub it off, regretting the thick black kohl eyeliner as it streamed down my chubby cheeks.

The music and spitting ended as abruptly as it started. I was flabbergasted. I watched the teenagers around me flood outside to smoke rollies and to discuss what must have been the best night of their lives, given their behaviour.

It was then I realised why being double the average age in that venue was such a shock to the system. The disdain I felt was merely a thinly veiled disguise for my jealousy. I was just envious that I haven’t got the energy to get that excited on a Wednesday night. That I no longer show much enthusiasm for jumping around for 45 minutes, unaided by alcohol. That my memory for lyrics, or pretty much anything, just isn’t what it once was. And that I no longer hold onto the genuine belief that one-day a rock star will show up and whisk me away from it all. It was a sad, sad day I tell you.