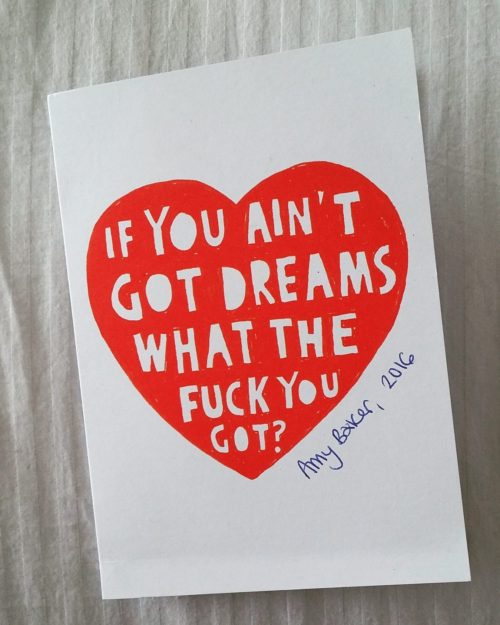 The race is on…but is it just with ourselves?

“For fucks sake – if only I’d moved faster, I’d be on that fun ship now counting money, discussing my property portfolio, and dirty dancing with Michael Fassbender”

*This article also appeared on The Huffington Post. Read the article here.
Last weekend I attended the Women of the World Festival. For two days I listened to talks, performances, and debates about the issues affecting women across the globe, and had my mind blown by being in the company of so many bad ass women, doing awesome things, implementing change, and getting shit done.

I skipped out of the Southbank on Sunday afternoon, feeling like a warrior, thinking, ‘I can do anything I want, and no fucker can stop the focused juggernaut that is Amy Baker.’ And then, Monday rolled around, and I was hit with that all too familiar feeling… ‘Ah man, I’m so far behind. It’s going to take ages. Maybe I’m too late.’

I want success. I’d like awards, people to carry my stuff and to applaud points I make in public arenas. But, and here’s the kicker, methodically working through all of the steps it takes to reach such lofty goals is a complete ballache.

Despite being a calm person, I can’t help but be overwhelmed sometimes by all the “Things I should be doing” – a list which ominously floats above my head at all times, glowering down at me, tutting loudly every ten seconds so I never have chance to forget I should be utilising my time more wisely.

I’m all too familiar with my list of ‘shoulds’…milestones I should be reaching, possessions I should be acquiring, articles I should be writing, knowledge I should be garnering, exercise I should be doing…My “Things I should be doing” list is an epic, tea-stained document, I’ve been working on since the age of 11 that stretches from my hands in South London, all the way to Westfield Stratford – and we all know what an arse that is to get to.

“Just take small manageable steps and you’ll get there darling” I hear you say, in the tone of someone who owns a home, a slow cooker, and a Sainsbury’s Nectar Card.

I know it’s all about baby steps, enjoying the process, and ticking things off the list every day. I know that, I do that…I’m not an idiot. But occasionally even the glittery ink you use to cross things off fails to distract you from the fact that ten new tasks have just been added to the bottom of the list. You were fine until you found yourself scanning someone’s Twitter feed, sucked into the fruitless void of comparison, realising you’re trailing wildly behind and the luxury yacht, housing your hopes and dreams, favourite foods, and a private cabin full of kittens, is about to sail off into the sunset without you, leaving you forlornly waving your hanky from the dock, thinking, “For fucks sake – if only I’d moved faster, I’d be on that fun ship now counting money, discussing my property portfolio, and dirty dancing with Michael Fassbender – I’m sure I saw him getting on.”

Maybe this constant need to be progress at breakneck speed is a London thing? Maybe it’s the gravitational pull of people rushing that makes you feel hurried? Everywhere you look people are in a frenzy to move to the next thing, to tick the next box…so what happens when you’re a slightly slower moving person? It’s inevitable you’re going to get ruffled whilst enjoying a leisurely stroll when people are constantly shoulder barging past you.

Patience is not my forte. Ideally, I’d like everything I desire to be right here on my doorstep brandishing a giant cookie decorated with the words “It’s your time babes!” in butter icing. If it’s not on my doorstep – that’s okay, but I’d at least like it to be around the corner, so I can anticipate its arrival by preparing a celebratory sponge cake, or mixing a rum cocktail. It’s when you know that things are potentially ‘miles off’ or ‘hopefully happening at some stage’ when The Gloomies set in and you start looking at your watch, tapping your foot impatiently and thinking god dammit this cake looks delicious and now I have to wait a year to eat it – a FUCKING YEAR! It’s the stuff you really want that makes waiting such a pain in the arse. The things you want to happen so intensely that you spend 51% of your time imagining they’ve already come true, only to continually crash back down to earth as your eyes unglaze, you realise you’re on a bus bound for Croydon, and you still have 100 things to do.

No matter how many steps you take, some days are going to feel like the floor beneath you is moving in the opposite direction. Like some kind of mean life-travelator dreamt up by sadists. As with any uphill battle, it’s inevitable your calves are going to grow weary, lactic acid is going to congregate in your major muscle groups, and you’re going to get a stitch. Maybe you’ll think you’re near the end, and then out of nowhere Wolf from Gladiators will appear before you wielding a pugil stick and he’ll be like, “Dude…I’m just going to hold you exactly where you are for a while utilising all of my strength. Don’t worry, I’ll let you get up eventually but for now I want to look big and strong and you need to look weak. I want to impress Ulrika, alright?”

Our eternal problem is that we think Ulrika’s watching…is she heck…she’s too busy flirting up a storm with Hunter and John Fashanu. We allow ourselves to get worked up because we think everyone we know is wondering why it’s taking us so long to make it. The fact is, they aren’t watching, they’ve got their own shit going on, their own “Things I should be doing” lists, and their own frustrations.

I know I’m not alone. When my mates cite their concerns I wish I could put them inside my head and let them see themselves through my eyes. Let them see how well they’re doing, and how awesome they look battling to achieve their dreams. Wouldn’t it be great if we could all do that? Maybe then we could exhale a collective sigh of relief and resolve not to be so hard on ourselves. Yeah we could continue huffing and puffing our way towards a finish line that’s constantly moving. Or maybe it would be healthier if we tried to remember we’re all on our own journeys, that its preferable to walk the bumpy sections for the sake of our knees, and it’s possible to avoid that pesky stitch if we just cut ourselves a break.